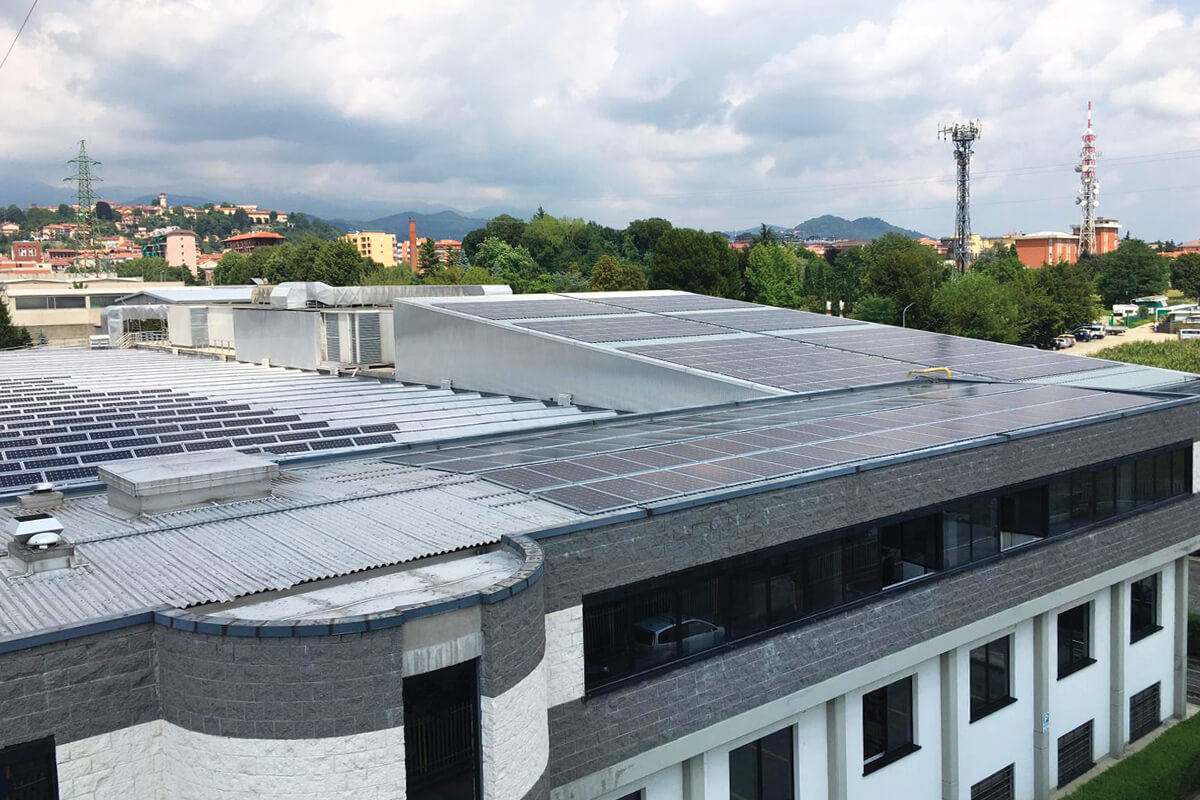 Total savings of approximately €1m in energy costs and energy fed back into the electricity grid to cover the average annual consumption of around 4.630 families

10 years after the installation of the photovoltaic plant in the production units in the Biellese region, the Marchi & Fildi Group takes stock of the operation and publishes the data on energy produced, consumed, and fed back into the grid.

The photovoltaic plant owned by the Group is made up of 11,385 modules divided between the three facilities in Biella (Production), Cerrione (Dyeing mill) and Verrone (Logistics), which in total cover a surface of 16,515 sq.m.

The energy kWh produced and not used by the company was fed back into the grid and corresponds to the average annual consumption of around 4630 families *.

The Marchi & Fildi Group has always been committed to rationalising electric energy consumption with the aim of contributing towards an eco-sustainable development without compromising the rate of production and the ability to grow. In addition to producing its own electric energy, over the years, the company has also achieved an increasing number of Energy Efficiency Titles (TEE), otherwise known as white certificates. In 2021, 138 TEEs have been awarded as a result of such interventions as the introduction of LED lighting and the optimisation of the production processes which, while still as efficient as before, permit the company to reduce the electric energy consumption of the machinery.

“Choosing to produce electric energy from renewable sources in order to integrate the energy needs for the running of the establishments was one of the crucial factors on our route of innovation towards a sustainable end product. It is the result of the attention the owners have always paid to technological innovation which optimises processes and rationalises the resources with a view to eco-sustainable development and growth, and which has led to, among other things, the birth of ECOTEC®, our technology which valorises and reuses products both pre- and post-consumer” states Massimo Marchi, CEO of the Marchi & Fildi Group. “We are very satisfied to have been able to make a tangible contribution in an historical moment when the strong connection between the exploitation of resources and climate change is so undeniably apparent, as well as the conservation of such resources by the utilisation of renewable sources and virtuous cycles of recycling waste materials. We have done, and will continue to do, everything possible to make a constructive contribution to the community to which we also belong, seeking to preserve the area and the environment which surrounds us for future generations“.

*In the meter class for the range of 3kW to 4.5 kW, the average consumption for residential properties is the equivalent of 3,382 kWh (source: Arera Relazione annual state of services for the year 2020). The calculations are the results of an internal study conducted by the Marchi & Fildi Group.